Case study: Redesign the process, then the control system 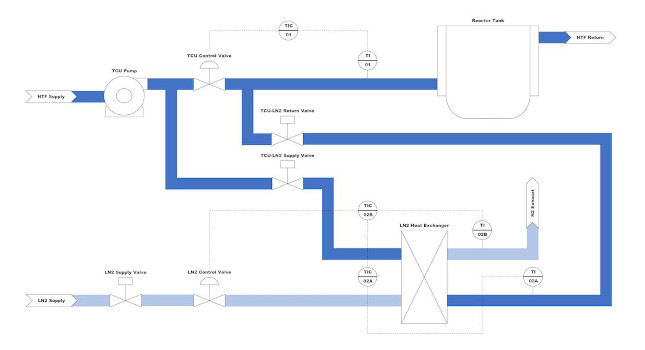 A workable process design is the foundation for successful control system design. That can conflict with the timing of the old system integrator adage about new plant construction: “Automation always comes last.” It’s only after everything else is put in place that the system integrator can step in to install and test the control system, so they’re often the last member of the construction team.

Sometimes, it means going back to the drawing board and redesigning the affected parts of the process. At other times, it’s up to the system integrator to bridge the gap and modify the control system in the field to work around a flaw in the original design.

Consider a situation where the system integrator was tasked with bridging this design gap for a pilot plant at a large pharmaceutical company and follow the challenges and iterative development process that led to the end result.

Fixing a flaw in the control design

For example, for a fixed setpoint offset of 5 °C, setting the TCU setpoint to -50 °C would result in a heat exchanger setpoint of -55 °C. Each TCU seemed to settle on a different setpoint offset due to differences in tank size and pipe length to the heat exchanger, but after optimizing the offset, the TCUs could run with liquid nitrogen cooling at the warmer temperature setpoints.

Figure 2: Conceptual graph illustrating the different methods of setpoint offset tracking used to model the relationship between the TCU and heat exchanger temperatures. The highlighted region represents the “Goldilocks” zone in which temperature control is possible. In the area above the highlighted region, the heat exchanger setpoint is too cold, so the TCU bypass valve opens too widely in response, causing the heat transfer fluid to freeze. In the area below the highlighted region, the heat exchanger setpoint is too warm, so the TCU temperature setpoint is never reached. The fixed offset method, shown in blue, performed well in the warmer TCU temperature setpoint range, but at colder setpoints, there was insufficient cooling to reach setpoint. The linear offset method, shown in red, worked well at the warmest and coldest TCU temperature setpoints in the range, but at mid-range setpoints, the heat transfer fluid would eventually freeze. Ultimately, the quadratic offset method, shown in black, performed the best, successfully allowing the TCU control loop to control the temperature across all setpoints in the liquid nitrogen cooling range.

The liquid nitrogen freezing problem was fixed; however, a new issue arose. Previously, the TCUs could operate near the fixed -78 °C heat exchanger setpoint, but after adding the setpoint offset functionality, the TCU was unable to reach these colder setpoints. The problem was the differential between the heat transfer fluid temperature at the TCU (TI-01) and that at the heat exchanger (TI-02A) increased at colder temperatures.

While a fixed setpoint offset of 5 °C may have worked for TCU setpoints near -50 °C, but for TCU setpoints near -70 °C, the setpoint at the heat exchanger needed to be 8 or 9 °C colder. To address this, the setpoint offset was modified to be dynamically based on TCU temperature setpoint. At first, a linear function was employed, but after several weeks of testing, a quadratic function was determined to best model this relationship. After implementing this change, the TCUs could consistently run at any setpoint across the entire liquid nitrogen cooling range.

Thorough initial design and investigation is key to avoiding a frenzied scramble at project end to patch up holes in the process design.